Jennifer Bell works from her home studio in the Durham Dales. 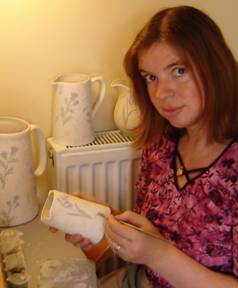 I first started painting plates as a hobby in my school holidays in 1984. I was bored & my Mam suggested that I paint but I didn't want to as I could not afford frames for my oil paintings so they just laid about in a draw. While out shopping we saw a Baby Plate which gave me the idea to paint plates as they did not need frames. So I found some old plates in the shed & I was away. 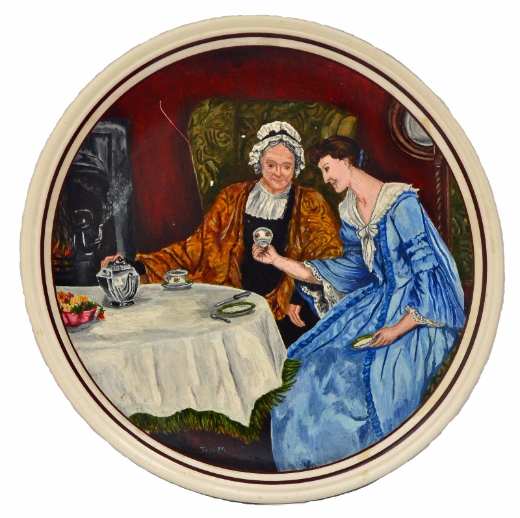 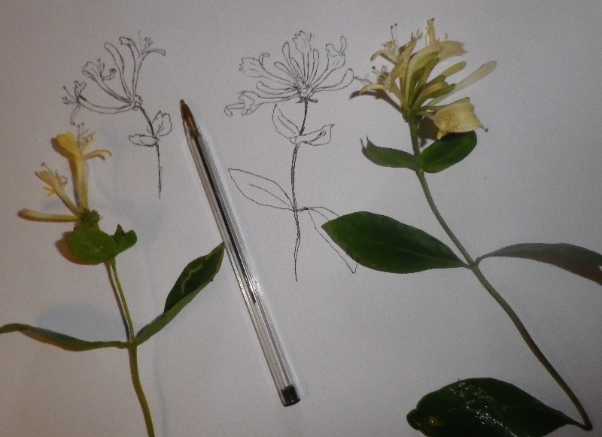 Pen Studies of wild Honeysuckle
After college I got a job in Halifax at a small design company. I worked a lot on Umbro designs even though I had never liked sport. I loved the job but missed living in the North East. A few years passed & I got made redundant when the company was took over so I came home. I had a couple of jobs which were a bit of a come down designing for the local bingo, Takeaways etc. instead of big companies. I got made redundant for the second time & so I decided to start my own business.
But days later I was offered freelance work in Hull for clients like Uncle Ben's & Asda. I enjoyed the work & they soon offered me a permanent position. But I just could not face the thought of working away from home again in an office every day & I thought while I was young I wanted to try & make a go of my own business.
In 1995 me & my sister started sharing a stall on Durham Indoor Market. I painted my oils onto plates & an old man would pass by & say to me "You should try On-glaze China painting." I did not know anything about On-glazes or proper pottery painting. Every time he passed he would tell me off for not painting with the proper china paints until one day he said he had a Kiln for sale. I decided to buy it off him & he also gave me some paints to get me started. I did not really know what I was doing but I soon got the hang of it, other China painters would ask me how many times did I fire the China & they were always shocked when I said once. They had recieved lessons on how to layer the painting. They painted, then fired. then painted, again & again to build up the colours. I had never had a lesson so I just went ahead my own way which always worked for me. I did not have time to mess around with multiple firing I was in business!
But sales on the market were not always great & a lady would often pass by & repeatedly say to me "you would do better at the craft fairs". So I tried a few craft shows & I found that I sold more in one day than I did all week at the market so I left the market in 1997.
I was doing well at the shows & galleries but I began to get a aching hand because the slip-trailing technique I used meant I was constantly having to applying pressure to a piping bag with a 0.5 mm hole.  Hand painting everything had become a strain on my hands, eyes & time. I remember after my second daughter was born & I was sat feeding her on my knee trying to draw out egg cups while on the phone to a gallery who where complaining they had not had their order. The last straw came when we appeared in Country Living magazine & we were inundated with orders for a hand painted mug. I just could not keep up so I decided our only option was to start a printed range of gifts to compliment the hand made ceramics.
So in 2011 I started adding printed gifts to our range. They are printed from my original paintings & I am really enjoying being able to spend more time on detailed countryside paintings. I also get t mess about on the computer which is what I missed the most from my days as a Graphic Designer. The options that have opened up since I have been able to make & print a larger variety of gifts is very exciting & interesting. After years of saying no to supplying shops & galleries & no to advertising I am now able to say yes which makes a nice change! 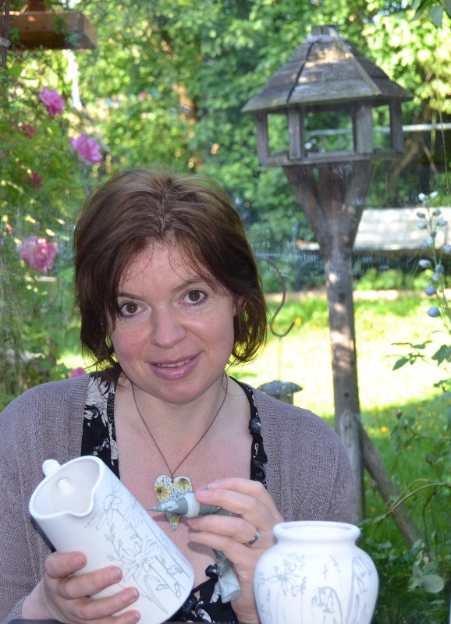 Me & my piping bag. June 2015
See how they've changed.
My style & techniques of painting is constantly changing over the years as you can see from the photos below.